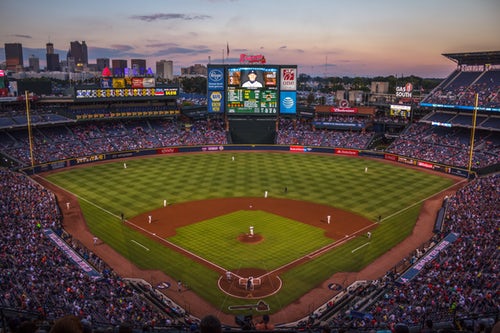 In ths NL East showdown, the first place Braves head to Washington to take on the surging Nationals.

Mike Foltynewicz is scheduled to start on the mound for the Braves and Anibal Sanchez is set to pitch for the Nationals.

The Braves have been hitting the ball extremely well, batting 266 with 115 home runs and 5.4 runs per game.

Freddie Freeman leads the team in home runs with 21 and RBI with 55, while batting .315.

Nick Markakis isn’t a long ball threat, but is an RBI machine with 41 so far this season.

Add in Dansby Swanson’s 14 home runs and Josh Donaldson’s 13 home runs and the Braves have a formiddable attack from top to bottom.

He’s leadins the team in home runs with 17.  Howie Kendrick leads that team it hitting and had added 12 home runs.

Brian Dozier, Victor Robles and Juan Soto are also in double-digits in home runs for a team that has hit 103 this season.

He’s really struggled keeping the ball in the park, having allowed 15 home runs or nearly three per nine innings.

Luke Jackson is doing a good job at the back end of the bullpen, posting an ERA of 3.00 ith 51 strikeouts in 36 innings.

Jacob Webb has allowed only six earned runs in 24 2/3 innnings, however Dan Winkler and Josh Tomlin have struggled to a combined 5.33 ERA in 60 2/3 innings.

As a team, the Braves are allowing 4.8 runs per game.

He’s allowed nine home runs in 65 2/3 innings, which could hurt him against the Braves, who thrive on the long ball.

Closer Sean Doolittle have saved 15 and been solid. However, the trio of Wander Suero, Matt Grace and Kyle Barraclough have a combined 6.31 ERA over 82 2/3 innings.

Like the Braves, the Nationals have given up 4.8 runs per game.

Both offenses score above the league average and both starting pitchers have had some issues keeping the ball in the park.

Particularly in the case of Foltynewicz, so the Nationals have a chance to score in bunches with some home run balls.

Washington continues to be on a roll and will give the edge to them in a high scoring game.

The pick is for the “over” and the Nationals to win by a 6-5 margin.