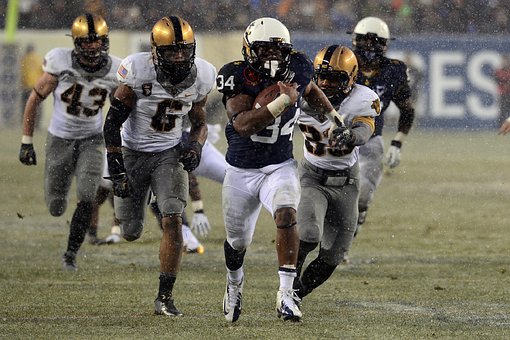 The college football season has returned, and has brought plenty of betting opportunities with it.

One of the most popular betting lines for college football is the OVER/UNDER line.

There are many reasons as to why this type of bet is so popular, so let’s take a deeper look into betting the OVER/UNDER line,

as well as explain how to implement a successful OVER/UNDER bet.

It is agreed on by practically everybody in the sports betting industry :

Betting college football OVER/UNDER lines correctly are far easier than betting the OVER/UNDER in the NFL.

Why do many sports bettors feel this way?

It is likely because of the drastic changes in talent between football in the NCAA and the NFL.

The NFL is full of paid professional football players, all of which were scouted and deemed worthy of a roster spot.

Unlike college athletes, these NFL players are being financially compensated for their time…

resulting in a much better football player both on and off the field.

Each NFL player occupies one of just 1,696 roster spots, highlighting the exclusivity of such a role.

Typically with NFL players, size and strength mismatches are These players are the cream of the crop, and are capable of doing just about anything on the football field.

For the most part, NFL players rarely encounter overwhelming skill, size, and strength mismatches. College kids, not the same…

Sure, some college football teams are loaded with future pro talent;

But for the most part, the majority of college football teams don’t have rosters stacked with elite talent.

Teams are filled with student athletes that can fill the role, but might not be capable of playing at the top level.

This can often lead to mismatches, especially when matched up against some of the better equipped teams…

such as Alabama, Clemson, and other college football powerhouses who are a pipeline for NFL talent.

When properly studied and recognized, these mismatches can end up being profitable opportunities for a sharp sports bettor.

This predictability factor is why the OVER/UNDER college football line is one of the favored by tons of sports bettors.

While the mismatches are always fun to look for, you don’t want to bet on just any matchup that catches your eye.

Make sure that the game you are considering betting on is able to clear a checklist of variables :

In a report done by Sports Algorithm Research, statistics revealed that the home team won 59% of games (Division I FBS Only).

Before placing an OVER/UNDER bet, study up on the home scoring and defensive numbers of those home teams, and repeating the process with the visiting side.

Probably the most influential variable that can be measured is the statistical data between the two teams.

When looking for an appropriate bet on the OVER/UNDER line in a college football game, the following data that should be considered

These are just a few of the stats that can help unlock the code to a winning bet.

Play with these stats above and create your own style of betting on the OVER/UNDER line of a college football game.

One detail of a game that some bettors tend to forget about is the weather conditions of the game.

Before placing an OVER/UNDER bet, make sure to check the forecast for the location of the game.

If the game between two passing teams is calling for heavy rain, an OVER bet may not be the way to go.

Injuries happen all the time, and depending on the player injured, these events can heavily affect the OVER/UNDER line.

Make sure to stay up to date with key injuries, and keep an eye on in-game injuries to be able to take advantage of OVER/UNDER live betting.

As many already know, college comes with some extracurriculars.

These can range from distracting parties, to an overbearing class, and includes a number of other things that the “college life” entails for student athletes.

Sometimes these activities can have a conflict of interest when it comes to sport performance.

The best sports betting insiders cherish truthful information about student athletes and their college lives, as it can prove to be impactful in certain cases.

For example, if word that the star running back from Oklahoma had a few too many drinks on a Friday night before a big game against Texas…

the UNDER bet would instantly become more attractive for insider bettors.

While this is a very broad topic, even the smallest of details could end up having an effect on the OVER/UNDER line of a college football game.

Just remember though, Vegas has insiders to!

While some of the variables mentioned previously may have an influence on the OVER/UNDER line of a college football game,

it is also important to not overthink these picks all the time.

just because of some small confliction of data in one of these brackets.

There will never be a perfect formula for being able to predict the OVER/UNDER outcome of a college football game,

don’t think too hard, but be smart with your bankroll and find the right matchups to make a move on.

All in all, the OVER/UNDER college football line is one that can be your best friend, or biggest enemy.

Keep in mind that each bet is it’s own monster, and that this list is just one of many tools you should be using to improve as a sports bettor.