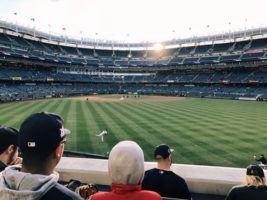 In this AL West match up, the Oakland A’s head to Los Angeles to take on the Angels with the teams deadlocked in the standings.

Frankie Montas is scheduled to start on the mound for the A’s and Griffin Canning is set to pitch for the Angels.

Offensively, the A’s rely on the long ball, having slugged 98 home runs this season.

Matt Chapman leads the team with 16 home runs and 35 RBI.

Khris Davis has belted 12 home runs to provide an excellent one-two punch in the middle of the order.

Jurickson Profar and Mark Canha have each hit nine home runs, while five others have hit seven.

The Angels have a considerable amount of power as well, hitting 80 home runs so far this season.

Kole Cahloin and Tommy LaStella have each hit 12 home runs, while 39-year old Albert Pujols shows he can still be productive, blasting 11 home runs with 33 RBI.

As a team, the Angels are averaging 5.1 runs per game.

He’s struck out 66 in 64 innings and allowed just four home runs, which should slow down the Angels power attack.

The A’s bull pen has been solid in general, particularly the pitching of Yusmeior Petit and Liam Hendriks.

The trio of Lou Trivino, Blake Trinen and Joakim Soria have been a bit less effective, at 4.21 ERA of 87 2/3 innings.

Griffin Canning has been excellent with the exception of one outing this season.

Although he’s given up six home runs, three of them were in one start. In general, he keeps the ball in the park, which is needed against the A’s.

Ty Buttrey and Cam Bedrosian have been the top relievers for the Angels, combing for an ERA of 2.10 ERA in 55 2/3 innings.

The Angels have allowed five runs per game this season.

Both pitchers are capable of shutting down the opposition and particularly keeping the ball in the park.

Since both offenses rely heavily on the long ball, the game is likely to be lower scoring than average.

Give the Angels a slight edge playing at home. Go for the “under” and a score along the lines of 3-2 or 4-3.