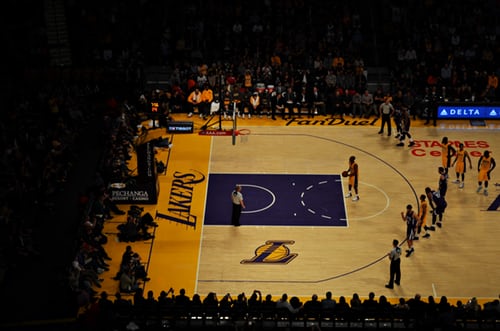 The NBA has never had so many eyes watching. WIth Russell Westbrook reuniting with James Harden,

Anthony Davis teaming up with LeBron, and many other big names making blockbuster moves,

the league has found new heights in popularity across the world.

These new duos are bound to be scoring machines, as well as an investment opportunity for a sports bettor.

You see, the sportsbooks can only estimate how these teams will perform in the coming year.

One of the best times for a sharp handicapper to get up on the bookies and online sportsbooks is at the beginning of the league season.

The highly anticipated 2021/22 NBA season is now just a month away, making this the best time to sharpen up on NBA Over/Under betting.

Along with the Moneyline and spread betting options, sportsbooks offer an Over/Under line with every NBA game.

This line is assigned to each game anywhere between 12 hours and 3-4 days before the game depending on the time of year and details of the matchup.

The Over/Under will be a number representing the number of points that the bookmakers have projected for this game,

giving bettors an option of wagering on the game going under or over the given number.

This Over/Under number is found using a very simple A+B=C formula when :

How to bet Over/Under in the NBA

Betting on the Over/Under bet is just as easy as it sounds.

If the bettor thinks that a certain game will be high scoring and end with more than the sportsbook Over/Under line than that bettor would clearly take the over bet.

If a different bettor felt that the game would be a super contested, tough, low scoring game that will end with less than the number of points given by the Over/Under line, the under bet would be logical.

Before placing that Over/Under bet, check out a few variables that could have an impact on the Over/Under.

Knowing your NBA teams and players is essential to this step. The matchups of each team should be studied, along with the positional matchups.

This will be helpful when finding out where these points will be coming from, and if they will exceed the Over/Under.

The numbers that would be helpful to look at would be the home/away defensive and offensive statistics of each team playing,

along with the individual scoring stats of the players in certain situations.

The data breakdown of the NBA Over/Under line is truly limited only to the handicapper and the time that he’s willing to put it.

What is the Home Team Advantage in the NBA ?

Always be caught up on the news of a team if you are willing to put money on them.

This means that the injuries and form of a team should be applied. This allows the bettor to know if a team is going through a hot or cold streak,

as well as if the star player is going to be at his best in a certain game.

These tells can go a long way in determining the Over/Under of an NBA game.

Your own data and knowledge

If you are betting on sports, you are either a fan of the sport or numbers, or both.

With that said, you should be trying to apply your own ideas and numbers to bet on the NBA Over/Under lines.

Live betting and other ways to bet the Over/Under line

After grasping the basic concept of an Over/Under bet, it’s time to go a little deeper on the topic.

Check out some other ways that the Over/Under bet can be executed.

The Over/Under line is so unique in the NBA because of the range that it can reach during the game.

Live betting allows bettors to take action on this changing Over/Under line while the game is going on, opening up endless opportunities.

This type of game would allow bettors to take advantage of the over bet if they feel that the game will turn around.

The same goes with a game that has an unsustainable scoring pace to start.

This type of game’s live line would represent a very high Over/Under line, one that would tempt a sharp bettor to take the over bet while the line is so inflated.

The Over/Under is not restricted to the point total at the end of the game.

The concept can also apply to individual quarters. This can be useful when betting on a fast-starting team, or a squad that might come out sluggish.

Sportsbooks also offer odds on the Over/Under point total of the first or second half of an NBA game.

This can be useful if a bettor has a jump on influential variables that can dictate the point total of a half,

including the importance of a game, the pace that’s being played, and other telling details.

One growing part of sports betting is the player prop bets.

This aspect of Over/Under betting allows the gambler to avoid the trickery that can be involved in regular NBA Over/Under lines.

Player prop bets are options offered by sportsbooks that give odds on individual players’ performances.

These player prop bets offer Over/Under lines on points scored, rebounds, assists, and any other stat that is recordable along with a combination of these stats.

If a whitty handicapper can spot a mismatch that can be exploited by a certain player,

these player props are where he could find some profits.

Before you go, we composed a short list of miscellaneous tidbits to make sure you have this knowledge of Over/Under betting going forward.

A quick example would be if the Nets v. Knicks game (that had an Over/Under line set at 220) tied at 105 at the end of regulation time, resulting in 210 points.

This game technically ended hitting the under, but since the game is tied, overtime must be played.

This is a nightmare for under bettors, as a game that is played for five extra minutes is much more likely to go over the original Over/Under line.

This detail is a savior for many over bettors though!

Many high-pressure NBA games, especially in the playoffs, can be hyped up by the media to be a big thing.

This excitement can often be replicated by the sportsbooks, offering huge numbers, usually high Over/Under lines.

Oftentimes, these high-pressure games turn into highly competitive, physical, and defensive battles that are anything but easy to score in.

Make sure to always consider the atmosphere of each game before placing bets, and try to avoid all Over/Under trap games.

If you are a bettor that is into hedging, the Over/Under bet is a great option.

Hedging is the act of placing a second wager after your first bet to ensure a satisfactory financial result.

This could mean ensuring that profits are made, or making sure money is not lost.

an occurrence that is popular in today’s NBA. When unsustainable scoring takes place,

live Over/Under lines are put into play, opening up hedging opportunities for the sharp sports bettor.